When you are looking to find a relatively cheap keyboard/piano it can be hard to know which option to buy. There are so many out there that offer similar features at a relatively similar price point, and choosing which brand to show faith in is one of the many issues you might face. The truth is that you should find the best option to suit your budget and the features you are looking for, and our guide is designed to help you to do exactly that.

A lot of people are looking at these two options, the Alesis Recital Pro and the Yamaha P45, due to the fact that they are both relatively affordable and good pianos for beginners. If you want to find a digital piano with a decent feel to it, that doesn’t have a cheap keyboard design, then these two might have drawn you in. In this guide, we’re comparing the features as we try to establish which one could be the best for you.

Both of these digital pianos fall into the “under $500” category, and it is hard to find good piano features on a digital or electric piano without spending significantly more than this. So, do they both live up to expectations?

For some of the cheapest piano options out there, both do a good job of giving a relatively realistic feel for beginners. At this price point, it can be tempting to go down to a 61 key keyboard model to try and find something even cheaper, or get more sounds and different features, we would advise against this as the cheaper keyboards you can get do not tend to feel like a piano and the keys often have a flimsy feel to them.

This leads us nicely to our next point…

If you are looking for a specific digital piano then you will probably already know how important the keys are. If you buy a cheaper keyboard then they will not be touch-sensitive, and even if they do have some form of touch response it is not likely to be as good at replicating the feel of an acoustic piano. Many people who buy digital pianos are serious about their piano skills, and want to be able to transfer to acoustic at will.

Both of these digital pianos are full-sized, this means they offer the full range of an acoustic, with 88-keys. This isn’t too unusual. The fact that both keyboards offer weighted keys is quite unusual for digital pianos a this price point.

Both advertise having “hammer action” keys. This means that they replicate the feel of the tiny hammers that hit the strings on a piano to generate the sound. In the case of the P45, it has a graded hammer action, this means that the keys are heavier in the low end and lighter in the high end, this is another way in which the piano is designed to be more “realistic” and share the feel of a grand or upright acoustic piano. 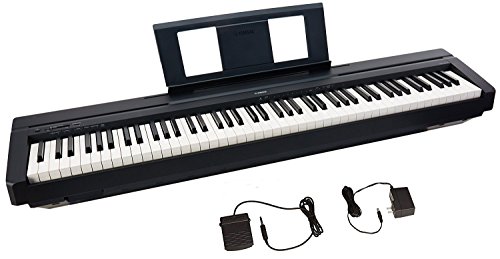 The Alesis Recital Pro's keys are perfectly usable and have a very decent feel to them, so they are an upgrade from the semi weighted keyboard, but they do seem to be lacking somewhat when compared to the P45. This is one area where Yamaha probably wins the race, not just because they are graded, but the bounce back feels a bit more realistic.

The sound the piano is capable of making is obviously another huge factor in the purchase of digital piano. So, which one is going to be best for you out of these two pianos?

If we purely compare the number of sounds then Alesis Recital Pro offers more, with 12 sounds in total compared to Yamaha’s 10. However, on quality, I think Yamaha just shades it. The Yamaha sounds are sampled from their range of pianos and the sound engine is definitely superior. The realism of the piano sounds is great and there are some other decent sounds including strings and electric voices for you to choose from.

Alesis has 12 and the quality is really hit and miss within the Recital Pro. Some of the sounds are pretty good, and will serve as a decent substitute for playing a piano, but others feel a little bit more cheaply made and have a “keyboard” feel to the sound.

The sound being so different probably owes to Yamaha having more of a range and a bigger history in producing pianos than the Alesis Recital Pro. Yamaha P45 uses Advanced Wave Memory Stereo Sampling to create the instrument sound in stereo and give it an acoustic feel that the Alesis model just doesn’t quite manage. The AWM sampling is usually reserved for more expensive models, so it is great to see it in such an affordable piano.

This is an area where the Alesis Recital Pro definitely wins vs the Yamaha model. While the P45 doesn’t actually have any effects, the Recital Pro has a few different options for modifying the sound to suit different compositions and certain circumstances.

Reverb, Chorus, Modulation, EQ and even Pedal Resonance are all included. Pedal resonance requires you to use the sustain pedal to modify the sound, but the others are simply used on the piano interface. The effects are pretty good, for an affordable model. Okay, they won’t make you sound like you recorded at Abbey Road, but they are nice to have as an option to alter your sound, especially in a live environment where it can be a bit harder to create the specific piano sound you are looking for.

If you want effects for the P45 you need to connect it to more hardware which means an added expense, or you can add these in post-production if you are recording.

Though they aren’t technically “effects” so much as features, it is definitely worth noting the fact that both of these pianos offer a transpose function to change the key of what you are playing as well as a metronome to help you to stay in time. In the case of the Yamaha, there is also fine-tuning if you want to get into microtones and actually tuning the piano, but this is more of an advanced way of experimenting with sound.

Design of The Pianos

This is definitely not the only thing to judge your purchase on, but design is important to many people, and you don’t want something that looks flimsy. There are white and black models of the Alesis Recital Pro, but comparing the black model to the P45, it is had to see too much of a difference. The Recital Pro is a bit more of a slimline option, but both have a similarly minimal design and simple interface for controlling the effects.

Both of these models weigh almost exactly the same, at roughly 26 lbs in weight, this means they are both fairly equal when it comes to portability as well as being well-matched in many other features.

Speakers are important for those who want to listen to the inbuilt sound rather than plug into a PA system or amplifier, or listen on headphones. It is nice to have a piano that has decent speakers and is actually able to do justice to the sounds within. We’d say that both of these sets of speakers are pretty similar when it comes to quality.

Both are surprisingly clear and clean for small, reference speakers. The Yamaha system gives you 12W of power whereas the Alesis Recital Pro provides a very impressive 20W. If loudness and power are your number one priority then go for the recital, if not, either is pretty good in terms of their clarity and speaker systems. Naturally, their connectivity means that you can hook up to other speakers and PA systems too.

Playing modes can be great for beginners and for pros who want to alter their sound in some way. For example, both of these pianos have some sort of dual-mode or “layer” mode which means that you can combine two sounds at once and build lovely layers and textures such as strings combined with piano.

In the case of the Alesis Recital Pro, there are also split and lesson modes. Split lets you assign different parts of the keyboard different sounds, so you could play bass on one hand while you play a piano melody on the other. The lesson mode allows you to turn the keyboard into two identical 44-key ranges, great for showing someone else how to play a melody.

Many pianos, cheap or otherwise, are starting to include features like these to entice people in, and it is nice to have the option to experiment with sound or just to learn in a different way.

Neither of these pianos offers anything particularly exciting when it comes to connecting to other devices, but they have the basic things that most people need. Both offer USB/MIDI or USB to Host which means that you can connect to other hardware such as a laptop and control virtual instruments or other software using the Alesis Recital Pro or the Yamaha P45.

A list of the connectivity features can be found below:

Neither has Bluetooth, but for these sorts of features you will usually need to part with more cash than the budget pianos.

In Conclusion – Which Wins Out of Alesis vs Yamaha?

Naturally, we aren’t going to pick a specific winner, just because of the fact that different features and prices will suit different people.

If you are looking for a better choice of sounds and a sound engine that really gives a professional feel then it might be a case of going for the P45.

If you want louder speakers and you are looking to save some money, plus you want to experiment with some onboard effects, the Alesis Recital Pro could be the option for you.

In terms of being decent options for beginners, both have a hammer action of sorts and both have a few learning and playing modes that make it easy to start to play and eventually transition to an acoustic model. For budget models, they both impress.

Helps beginner and pro musicians to choose their new musical instruments by providing reviews, guides, tips & comparisons of the best pianos and violins.

We are participant in the Amazon Services LLC Associates Program, and we get a commission on purchases made through our links